You're not perfect, but you are perfect for me; my untimely review of the video game MANHUNT

So I'm a retro gamer.

Meaning, I bought a PS2 on sale, and get my games used. Cheap=retro. Also, I avoided video games for quite a while because I have a history of obsessive behavior concerning them. Something about endorphins. Whatever. So as a result, I missed out on all of the PlayStation generation of games. The ps1 was the big thing when I quit gaming. What am I getting at? I play ps2 games thinking they are pretty cool. I'm not quite warmed up yet to the glossy realism of ps3 stuff. Maybe by the time I get thru every ps2 game I want to play I will be, but until then I am here to give you reviews from a decade ago.

What attracted me to this game was the stealth aspect. I'd played Ghost Recon on the pc (one of the only games i played in this period) and really dug the stealth and sniper levels. A game entirely like this? FUN! Plus, I am a sucker for crime documentaries on serial killers and forensics shows like "the new detectives", "the first 48", et al. It felt like this was the game for me. And it was. It took me a while to get some of the controls down, but I chalk this up to just being rusty with a game controller (I believe it was only the 2nd dual stick game I'd played). 2 years later on the second playthrough I am getting vicious and gruesome executions pretty easily. 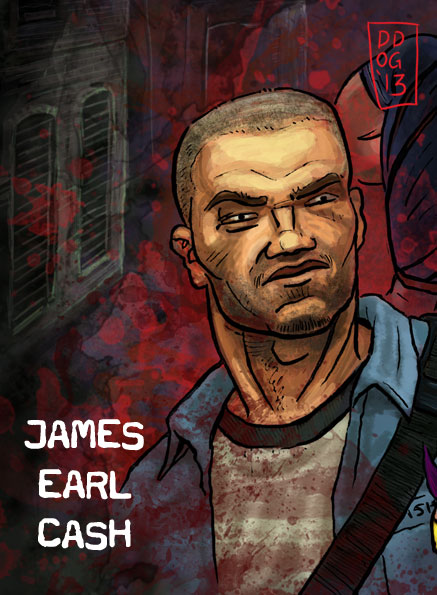 The plot is simple:

You are James Earl Cash, notorious killer, and you are executed by lethal injection in the opening cinematic. As game play begins, you find that your death was faked, and now you are at the mercy of a Mr. Starkweather, former big-shot Hollywood director, who now makes his living making snuff films, and you are his new star.  He talks you through several levels of Carcer City decay, beckoning you to kill the gang members he's populated them with. Through your earpiece, he catcalls you when you are slow, berates you when you mess up, and praises you on good kills. About halfway through the game, Starkweather figures he's done with you and has you disposed of, but Cash is just too tough to be bested by some hired mercenary security outfit. Now you are in control, and you are gunning for the Director. The games are over, and rather than gangs you are facing Carcer City PD, SWAT, and Cerebus- the aforementioned "Black Water" types. Oh, and the crazy guy in the pig's head mask who wields a chainsaw.

Not being seen or heard, baiting your enemies into dividing, and rarely being able to quickly overpower groups with surprise and firepower are your main tools in gameplay. Hunters will fall behind their comrades to check out a noise by themselves, or simply pass unwittingly by your particular pool of shadow, giving you an opportunity to sneak up from behind and dispatch them. Initially this is done with simple objects like plastic bags and glass shards, but soon you are using crowbars and machetes. Later levels involve firearms, but these require you to run like hell for a new hiding spot because every enemy in earshot will close in on you once the trigger is pulled. Occasionally it is a good idea to surprise a crowd and deliver a round of headshots to all before they can fire back, but this is reserved for just a few circumstances. 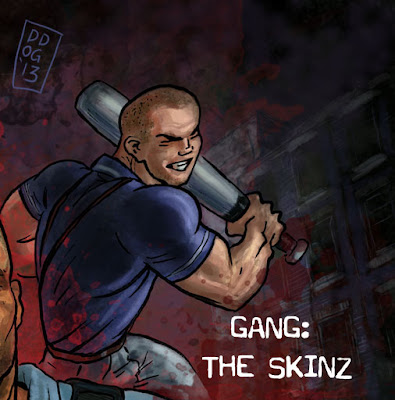 The enemies all have their particular personalities which affect game play on each level, but the biggest factor in toughness to a level is the layout versus the type of available weapons. Levels like a slum or a junkyard, with a lot of enemies, open spaces, and plenty of shadows are fairly easy if you have a baseball bat and a crowbar that you can kill quietly with. A level, such as subway tunnels, with tight enclosures, unforgiving acoustics, rare hiding places, and relatively few enemies can be quite a bitch if the only available weaponry are firearms, so that each attempt to kill an enemy attracts every other enemy on the damn level. In fact, this dynamic is the only thing that really changes the difficulty of the levels. You never level up, and your enemies aren't in themselves any harder to kill (except a couple of "bosses"). Level layout and weaponry are the only real changes, and I like that about this game.

Among the gangs, my favorites are the "Skinz" and the "Smileys", purely for shallow reasons (see accompanying fan-art). I always apologized to the skin in the blue Fred Perry before offing him. I'd rather smother him in kisses. The Smileys are for the most part muscled thugs half dressed and covered in tattoos. What's not to like? The Smileys are an across the board fan-favorite, due to their wacky personalities. The entire gang wear some version of a smiley face mask. One has a purple mohawk and is covered in tattoos that all say "KILL". Another, "Fug", is dark skinned, has a red mohawk, and has "DRUG SLUT" spray painted across his chest and torso. Some wear kilts, and the leader, "Barry", who dresses as the wife he murdered and shouts out nagging quotes from her about what the neighbors might think, or how disastrously the dinner party is going. Of course most of your opponents will make racial slurs at some point, and some gay-baiting, assumedly because because convicts enjoy the butt-sex. The Cerebus guys even quip about having you on their "gaydar". Offensive? No. These are your enemies. They aren't the good guys. But then again, neither are you, and you don't get to deny these slurs... just take out the assholes who said them. Whether you are offended by them or not is your deal, I think it's pretty funny. If you are easily offended, I'd stay away from this game.

Cash himself (though not much of a looker) is racially ambiguous. Cool. From the slurs the Skinz  and other gangs taunt him with, one might guess that he is bi-racial. I like that he is for the most part silent. The few times he speaks (on the 2 occasions you "babysit" another character), his voice seems out of place, and not what you imagined by this point in the game. I would have to say he should have remained silent and used only hand gestures... or that a voice actor who sounded naturally tough was used, rather than someone "butching it up". It brings you slightly out of the total immersion into the game, where sound is so critical to gameplay. 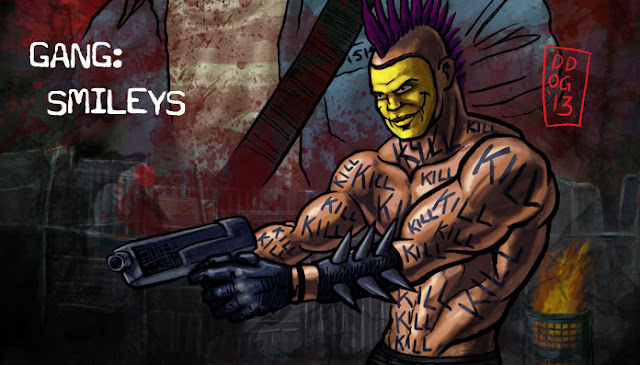 After reading up on it after the first play through, I discovered that it is actually the #1 banned video game worldwide. And it certainly gets it's share of infamy: it is once again in the headlines after the Sandy Hook Massacre as the #1 slot in the top ten offenders of violent video games influencing out society (a
list compiled by the NRA, no less). It's sequel gets the #2 spot. Can you say "deflection", NRA?

I haven't played #2 yet, mostly because it gets a whole star less than it's predecessor in a 5 star rating system (Amazon), but I will eventually. After replaying manhunt just before writing this review, I played Midway's the Suffering, another convict-centric game (but that is best left to be talked about another time).
I love the atmosphere of Manhunt. I tried to play Splinter Cell directly after Manhunt and just hated it. It was anal and sterile. I don't know if I will ever go back to it, but Manhunt I will play again. It's on my "comfort games" list. Is that creepy?

The following is the full piece of fan art I created for Manhunt, which I chopped up to use throughout this article. Enjoy!