File under: "my favorite blogs". Monster Brains is one of my favorite blogs, devoted just to monster artwork. This is as good a reason as any: an entry on spanish artist Emilio Feixas. Now this is a djinn! Take that, Disney!
Posted by dogspunk at 10:17 AM No comments:

my first kindle experience... guy endore's "the werewolf of paris"

So I had finished an awesome collection of horror stories that I had honestly just picked up because of the neato Edward Gorey dust jacket. The book was called "Masterpieces of Terror and the Supernatural" and edited by Marvin Kaye. 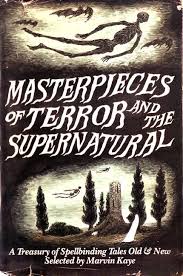 But that isn't what this post is about. Marvin Kaye included a further reading list, and on that list was "the Werewolf of Paris" by Guy Endore, said to be for wolfmen what "dracula" is for vampires and Shelly's "frankenstein" is for flesh golums. 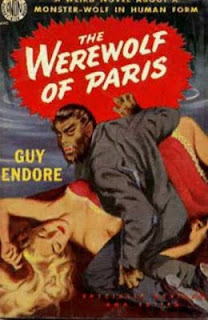 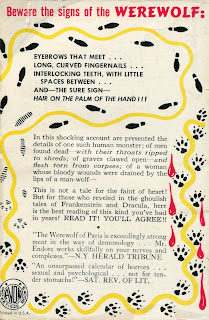 Needless to say I wanted to read it.
The book itself is out of print and as such is pretty rare. Used paperback copies can be from 10 to 100$. Hardback up to several hundred!
So I checked and the LA public library has a copy, but Daniel suggested I get it on Kindle (he'd just bought a kindle a few months earlier).
$2.99!
So I took the plunge. I was skeptical of the kindle at first, but I like it just fine. I find the typos amusing... they show that a program digitizes the pages, because now human would misspell "flair" as "l4air". So it ends up being like reading a dialect.

I am about two thirds through the book. I like it, some parts more than others.

The story begins with a lineage history that results in the genetic mutation of the werewolf character. The present day of the story is Napoleonic France. There is a lot of taboo sexual situations, squirm inducing ones. The grossest scene so far involved a banquet sampling alternative meats for the besieged parisians (like rat, dog, cat, raccoon, et.al.). The best scene so far was one of the few from the P.O.V. of the werewolf, as he escapes his captivity and runs through the night, taking his clothes off and making a kill. His senses don't change but how his body behaves does, as he thinks to strangle a victim but rends it's throat with his teeth, thinks to carry the body away but instead pulls with his maw and pushes against the ground with four legs. 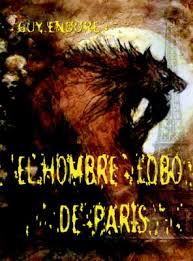