The following post is the inaugural entry on INK BASTARDS, a tattoo review blog focusing on Spike TV's Ink Masters. Daniel and I are big fans of the show, and were sad that there was no regular review blog.

So now there is.

Oh dear. Climb on in the Holodeck and jump to warp, tatt bros, because we're taking off to Deep Space 9! Daniel wrote that to bother Dave because this episode is all about Star WARS...not Star Trek. 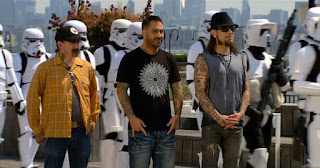 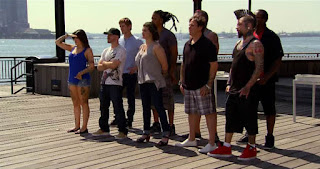 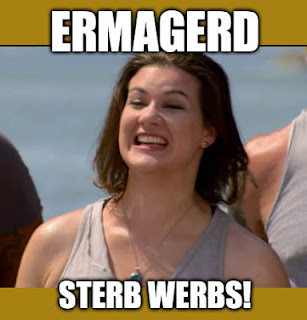 In this episode the tatt bros were tasked with all sorts of tie-in bullshit, all of which tied in to the biggest poop deck of a sci-fi series known to man, Star Wars. When we turned on the TV to watch and saw the short on-screen description of the episode Daniel said that Sarah was going to get a clit hard-on about this being a dork challenge...and we both busted up laughing when she did, in fact, juice herself on screen the second she saw the Sterm Troopers walking up for the Flash Challenge.


After being treated to a screen-filling codpiece, viewers got to watch the contestants stumble all over themselves to prove that they understand what the word "contrast" means. Odd how few of them had any idea.

Dave loved Tatu Baby's Vato Trooper artwork, but in the end it was 'Hawke Cub who took the "prize" and won the advantage in the Elimination Challenge of being able to assign the  human canvases guinea pigs to the remaining contestants.


'Hawke Cub did some silly speech to try to make himself feel like a man, but in the end he just sounded silly and dumb and retarded and sad and ugly and so 10-minutes-ago, y'all. There was some phony editing drama with Sarah being all bummed about having to do a Storm Trooper (It's about contrast and those things are just white!) and then Jessie started saying how his client  idiot could only have R2-D2 or C-3P0, but not both. Dave didn't get the problem here but Daniel just shrugged and continued to mack on his ice cream. Dave also predicted two things: 1) that Tatu Baby would win this challenge because of the edit she received and 2) that at around this point in the show she would emerge as a contestant to beat. He was right on both accounts.

SO! Tatu Baby won her first Elimination Challenge. Congrats Mrs. Baby. Her "little green guy" tattoo (We don't think she ever used the name Yoda, much to Daniel's delight) was the clear winner this episode, and for good reason we thought, although Jaime's Chewbacca tattoo was another one Dave might have put up for the win. It gave the judges the contrast they demanded, made her client fool happy and was indeed quite nice. Dave noted that it was very painterly and beautiful.


And it's a "OH THANK FUCKING GOD" goodbye to this season's Al Fliction, Kay Kutta. This muckraker should never have been on this show to begin with, then should have been eliminated long before now, and eventually proved himself to be the guy they kept on because he was such a jackass.


His tattoo was terrible. A flat, round mess that Daniel thought looked like a moon pie. The judges put it best when they said that it looked like his Sith Guard (per Dave, of course) was made out of lunch meat. We feel like that's a good summation of his entire career, really: BOLOGNA!


Yay! Kaye is gone. He actually said, after his elimination, "I'm damn near a born loser but I keep winning." This was either a really cruel  edit or, more likely the case, the way he deals with life. "I just keep winning" he boasts as he's being tossed. We say good riddance. It will be fun to see in seasons going forward who is going to play this role.

What we didn't get was the way the judges were falling all over themselves as they dismissed him to make sure that he knew they thought he was really great and talented and wonderful and on and on and on. Either they were intimidated by him for some reason or he's someone who is actually kind-of bi-polar and they chose to only show his, um, downswing moments. THE FUCK OUT OF HERE with all that ass kissing bullshit...THROW THE HACK OFF.

Auntie Navarro was her usual self except on this episode she delivered some really dorky dialogue like, "Will you use the force to create a cool tatt or will you join the dark side and become eliminated?" or some stupid shit like that. Ugh. Auntie Navarro still doesn't seem quite comfortable on camera two seasons in, although at least she's received some decent tattoo work to cover up all of that awful work she was sporting throughout the first season.